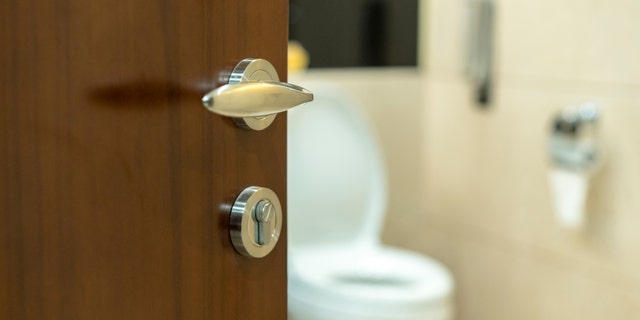 A woman in the U.K. has reportedly called for a Halloween decoration ban after she claimed a recent bathroom trip left her confused about a toilet’s working order.

The woman, whose identity hasn’t been revealed, apparently aired her grievance on Nextdoor – a hyperlocal social media platform for neighborhoods – according to a report from MyLondon, a British newspaper owned by London-based publisher Reach plc.

MyLondon reports that the bathroom the woman visited at a local business had a “keep out” sign on its toilet.

“[I] think that Halloween decorations should be banned,” the woman reportedly wrote. “I ended up leaving this establishment because I got confused as to if these toilets were out of service and no entry.”

A woman in the U.K. says she couldn’t tell if a toilet’s “keep out” sign was a Halloween decoration or a real out of order sign.
(iStock)

“How are people expected to be able to know what’s opened and closed when [there are] big keep out signs on everything,” the post reportedly continued.

Warning signs are a common Halloween decoration sold by party supply companies. However, not all countries celebrate Halloween the same.

HALLOWEEN BY THE NUMBERS: FUN FACTS ABOUT THE SPOOKY DAY

Faux warning signs that say “keep out” are a common Halloween decoration.
(iStock)

The day has been gaining popularity in the U.K. in recent years and the decorating of homes and businesses has become a growing trend, according to MyLondon.

In Britain, Halloween has traditionally been celebrated with ghost stories, vegetable carvings and kid-friendly games, including bobbing for apples, according to Historic UK, a British history and heritage magazine.

“The current use of pumpkins is a relatively modern innovation imported from the United States, and we can also extend the same debt of gratitude to our friends in America for that ‘quaint’ ‘trick-or-treat’ tradition,” the magazine wrote in a Halloween-focused culture report.

Halloween has been a spookier celebration in Scotland with children often dressing up as evil spirits, according to Historic UK.

The magazine reports that some Scottish Halloween celebrants participate in traditional activities that can be traced to the pagan Celtic festival of Samhain – which is thought to be one of the origins of Halloween.

Fox News Digital reached out to Nextdoor for comment.

Cortney Moore is an associate lifestyle writer on the Lifestyle team at Fox News Digital.