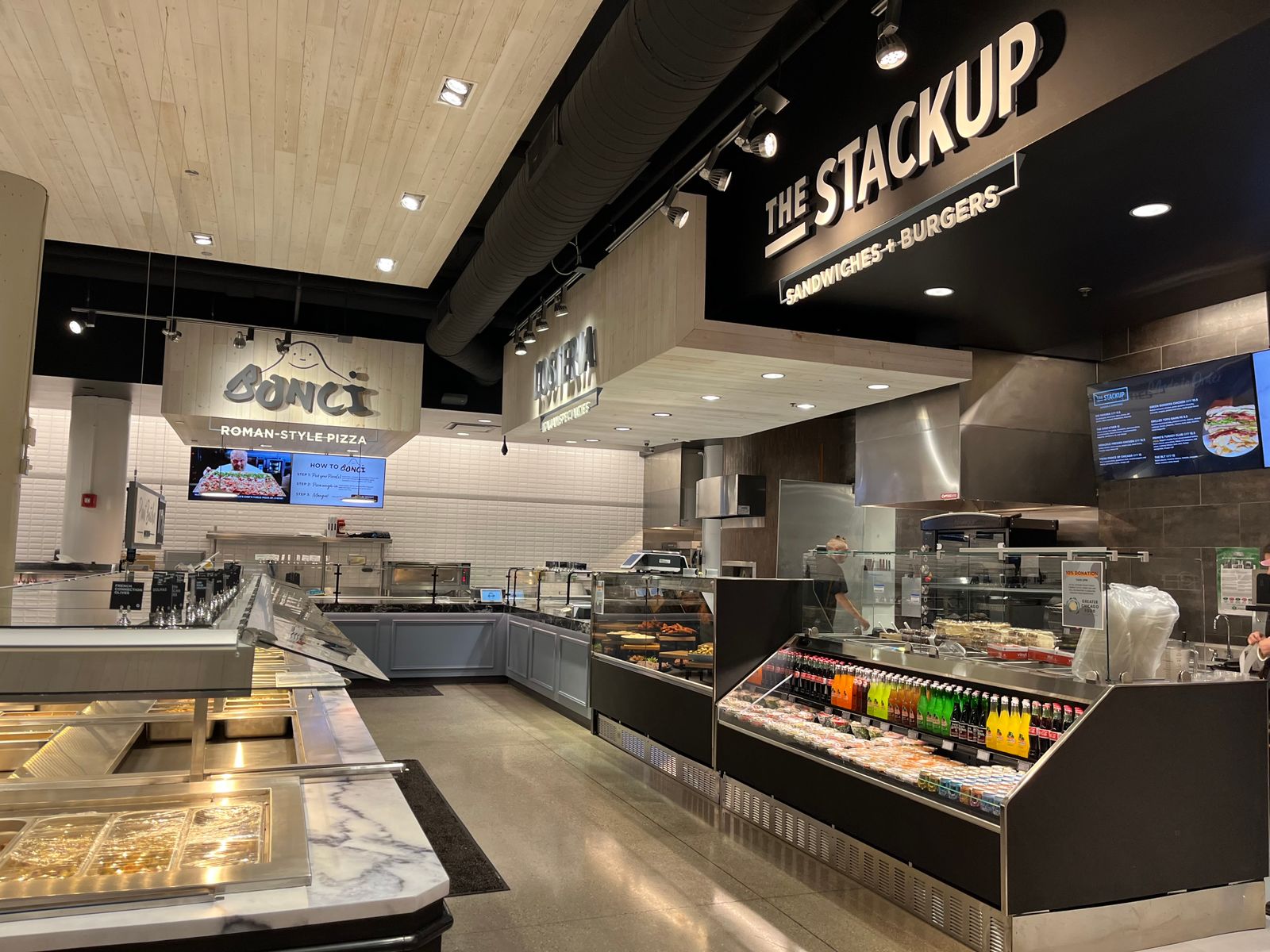 The store, which opened Tuesday, is the latest endeavor from the Chicagoland grocery startup that includes veteran supermarket executive Bob Mariano among its founders. It’s the second store for the fledgling grocer, which says it’s on track to open15 stores by 2025.

Located at 1233 N. Wells St. in the Windy City’s Old Town neighborhood, the 27,000-square-foot store, located on the ground floor of an apartment complex, is 50% larger than the first Dom’s location, which opened in spring 2021 in the Lincoln Park area.

With 20,000 SKUs, the Old Town store includes 12,000 more items than its counterpart and places a major emphasis on local, seasonal and globally inspired products. Many items are sourced from Chicago and Midwest businesses.

The new store has a similar European market vibe to the first Dom’s but also used lessons from the first store to enhance its offerings, according to Megan Jennett, marketing director for Dom’s. The ceiling decorations in its cheese department, for example, bear a resemblance to the decorations at the Lincoln Park’s coffee station, Jennett said, and the stores share a striking “Wine Library.”

Many of the changes at the Old Town store were driven by a desire to offer more personalized offerings and highlight how Dom’s is leaning into experimentation and flexibility. For example, this store has an expanded personal care section due to the specific customer demographic, Jennett noted.

Prior to the store’s opening, Jennett gave Grocery Dive a tour. Here’s a look around.

Meals as the main event

There are two entrances to the store with one leading customers to the produce section and another providing easy access to the meals hub, which has grab-and-go options, food stalls as well as wine and coffee bars. The entrance by the meals has one self-checkout machine and two manned registers for 10 items or less, Jennett said, noting the Lincoln Park store doesn’t have any self-checkout counters.

While the Lincoln Park store placed made-to-order stations at the center of that store, the Old Town location has placed them in the back right corner to provide easy access to the backroom, Jennett said, noting this new placement aims to create more operational efficiencies.

Customers can find Roman-style pizza from Bonci, an Italy-based pizzeria that made its U.S. debut in Chicago in 2017 and has an exclusive partnership with Dom’s. The store also features proprietary foodservice stations, including Gohan, which offers Japanese food; L’Osteria, which makes Italian dishes; and The Stackup, a sandwich and burger stop. Customers can order from the counters, from the in-store kiosk or from the grocer’s app.

By the made-to-order stations, customers can find the hot and cold bars — new additions for Dom’s — and a wall of grab-and-go options. Dom’s has jazzed up the salad bar concept with names like “Chef Crafted Hot Meals” and “Plant Butcher” and offerings like Rhode Island-style shrimp; Sicilian cauliflower; salads with a seasonal rotation of greens; and a rotating selection of hot soups, grains and rices.

While the Lincoln Park store uses one station with a walk-up window to serve coffee for the first half of the day and then alcohol, the new store split the services into two stations due to their popularity, Jennett said.

At the Old Town store, The Brew serves local coffee, tea and breakfast food from Doughnut Vault, Howdy Kolache and Corey’s Bagels — three Chicago establishments. Its wine bar, which has happy hour from 4-7 p.m. on weekdays, pours beers, cocktails and select wines, along with exclusive offerings from local makers.

While meal solutions may be the focal point of Dom’s, alcohol is certainly not an afterthought. The Old Town store, like the first Dom’s store, gives its alcohol selection a dramatic display, known as the “Wine Library.” True to its name, there are tall shelves filled with wines, liquors, seltzers and beers. There are even books, too, about entertaining and choosing wines.

There’s also an extensive selection of whiskey, bourbon, gin, rum, vodka, tequila, mezcal and other liquors, along with a section dedicated to zero-proof drinks and mixers. Shoppers can find both local and global beers.

Spices from Spice House and cookies from gluten-free bakery Defloured are a few of the more than 140 local brands shoppers can find at the store. In partnership with Tortello, a Chicago-based maker of handcrafted pasta, Dom’s sells an exclusive “O” shape from the brand, Jennett said.

Along with local items, Dom’s places an emphasis on seasonal products, which currently include carnival squash, pie pumpkins and Bartlett and Red Sensation pears in the produce aisle.

Product tags alert shoppers to which items are local, organic or gluten-free. The electronic shelf labels display symbols for product attributes, like vegan and gluten-free.

Along with the selection of local and seasonal products, customers can find private brands, including coffee, cupcakes, and nuts and dried fruit chunks in glass jars, Jennett said, noting Dom’s is planning to expand its private label selection next year.

Dom’s sources its fresh seafood and meats from the same vendors as the ones high-quality restaurants in Chicago use. Customers can find oysters and clams, which are difficult to find in most supermarkets, according to Jennett.

Dom’s places a strong emphasis on personalization, including a made-to-order cake program and a bulk section with dozens of different types of nuts.

At the store’s main entrance, a pineapple cutting station will soon greet shoppers. Customers can also find a chop-to-cut program at the store where they can bring their produce purchases to the kitchen to have the items chopped to their specifications, Jennett said.

The store is filled with other unique touches. For example, there are slow-melt ice cubes for drinks in the frozen section and a small section of indoor decorative plants near the floral department. Dom’s has even created its own signature levain — a leavening agent made from a mixture of flour and water — that it uses in its sourdough and focaccia breads.

Dom’s aims to serve as a “third place” for social gatherings away from people’s homes and workplaces, Jennett said.

The Lincoln Park store sees customers linger for interviews and dates, she noted, and the new Old Town store is looking to replicate that. The store features indoor and outdoor seating situated by the entrance to the meals hub. The indoor seating area is cozy with chairs, tables and sofas in earthy green and brown tones.

To capitalize on neighborhood pride, the store sells Dom’s-branded baseball caps that say “Old Town” as part of its fan merchandise section.

The store is planning to host events to bring the community together. One already on the calendar is a cheese board-making class later this month with Erika Kubick, author of “Cheese Sex Death: A Bible for the Cheese Obsessed,” which customers can currently find in the store’s cheese department.

How to Make Appliances a Seamless Part of Your Kitchen Design

Can rugs and curtains help you save energy this winter? | Society