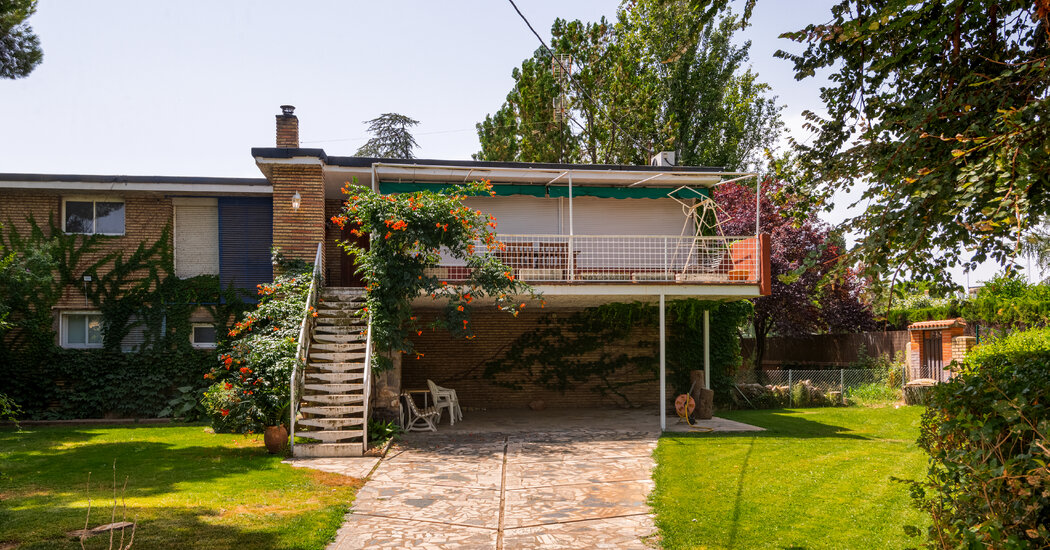 This article is part of our latest special report on International Golf Homes, about some of the top spots to live and play.

Tucked behind one of the main roads out of a blustery city in the north of Spain is an unlikely find: a gated community of California-style homes built in the middle of the 20th century.

Sixty-five years ago, the construction of Torres de San Lamberto, a residential area for the families of American military personnel stationed at the nearby U.S. air base, brought not only a new concept of suburban living to Zaragoza — in the form of a cul-de-sac “garden community” — but also the city’s first golf course.

The American airmen and their families are long gone — they left when the air base closed in 1992. But the allure of the cheerful, flat-roofed homes has only grown over the years, as has the popularity of the iconic golf course, which is now managed by the Spanish Ministry of Defense.

The Torres de San Lamberto homes were commissioned following the signing of a military alliance between the United States and Spain in 1953, which aimed to put an end to Spain’s international isolation after World War II.

Originally conceived as subsidized homes, to be rented at an affordable price by the U.S. Air Force, a couple of the properties are now for sale on real estate websites for nearly half a million dollars each.

Twenty-two years ago, Pilar Rubio, an architect employed by the city council, snapped one up for $200,000. Even though her home could fetch double that amount on the market today, she’s not selling.

“There’s nothing else like these houses in Zaragoza,” Ms. Rubio said.

She has a point — public tenders for the design and construction of housing developments here have never been as fiercely contested by renowned international architects. Richard Neutra, one of the most influential architects of the 20th century, famed for his work defining the Southern California style, presented a proposal to a panel of judges, made up exclusively of Americans. But Mr. Neutra lost to a team of Spanish architects, headed by Luis Laorga, and supervised by Ernest Joseph Kump, another Californian.

Reportedly, Mr. Neutra was so disappointed that he did not return to Spain until a year before his death.

Most of the 158 Torres de San Lamberto homes were built in two-story blocks, each comprising four family units. Though they do not bear Mr. Neutra’s signature style, they were undoubtedly inspired both by his conviction that human well-being is connected to nature and by his groundbreaking modern multifamily housing.

“At the time, the concept of entering a home through its living room had only been seen in American films,” said Luis Franco Lahoz, a professor at the Zaragoza School of Architecture. “The U.S. air base brought an open style of architecture with large glass surface areas that was far from Spanish bourgeois standards.”

The land surrounding each block was divided into four garden patches, separated by low, whitewashed fences. The units are either ground floor or first floor apartments, ranging in size from about 1,200 square feet to 1,475 square feet.

To maximize sunlight and offer protection against the wind, one ground-floor and one upper-floor unit face southwest, while the other two units face northeast. All four have a porch under which the family car could be parked. Both upper floor homes also have an outdoor stairway leading to the front doors and to a patio over their porch. Windows are shielded by sliding natural wood shutters.

According to Ms. Rubio, the Spanish builders were not used to such architectural concepts.

“The design of six-meter-wide, open-plan buildings was so innovative in postwar Spain that the builders were afraid the roofs would fall in,” she said, pointing with a grimace at a load-bearing wall that runs through the middle of her home.

Though not included in the blueprints, the wall was erected by the wary Spanish builders.

The original layout of the drains is also haphazard by 21st-century standards. Ms. Rubio’s neighbor’s wastewater pipe runs under her garden.

“If the neighbors have plumbing problems, it’s my lawn that will be dug up,” she said.

But the advantages of living here outweigh the disadvantages for Ms. Rubio — particularly last year, when the positive influence of the homes on the physical and emotional well-being of her family became very clear to her.

Some of those design elements include the overhanging roofs, abundant glass and outdoor sitting areas, which open the houses to the outside and allow the inhabitants to move easily from the rooms to the gardens.

“During lockdown, we lived not just in the house, but in the garden,” she said, gesturing through the vast living room windows, which open onto a dining area in her neat kitchen garden.

Five miles away from the Torres de San Lamberto housing estate, the golf course that was designed and built by the U.S. Air Force engineers who first lived here in the 1950s and ’60s has also withstood the test of time. Nine fairways crisscross a barren, windswept landscape behind the fences of what used to be the U.S. air base and is now a Spanish military headquarters. (On a recent morning, most players were retired Spanish military personnel.)

But a growing quota of members are civilians — hardy golfing enthusiasts who are not daunted by ministry-of-defense protocol or strict access controls.

Juan José Martínez, 40, a dental implants salesman, has been a member of the club for three years.

“I’m used to it,” he said, referring to the armed soldiers at the barricades. “But when I invite guests, they can be surprised, especially if asked to show the papers for their cars.”

The course has only nine holes. Its greens are not as trim as in other local clubs. The concentration of the players is frequently broken by the roar of low-flying F-18 fighter jets. But membership is coveted by locals like Mr. Martínez.

According to the manager, Lieutenant Pedro Luis García Ramírez, there is a civilian waiting list of about three years.

One of the reasons for the course’s popularity might be its proximity to the city: a mere 15-minute drive from the hustle and bustle of the center, which makes it easy to fit a round of golf in over a long lunch break or in the afternoon, after work.

“I always keep my clubs in the boot of my car,” Mr. Martínez said. “Just in case.”

For Senior Master Sergeant Germán Fajardo, a 41-year-old air traffic controller, the attraction of the course is in its reduced rates. He pays an annual fee of just under $200, and $3 every time he books a tee.

An added bonus is in the high quality of coaching at the community’s golf school, which opened in 2013, and last year sent six of its pupils to compete in Spanish junior championships.

Senior Master Sergeant Fajardo has already signed up his eight-year-old daughter for weekend classes in the fall.

“I’ll drop her off for a couple of hours and hopefully get in a round of golf myself,” he said.

Perhaps the U.S. Air Force engineers who designed this course over half a century ago for the enjoyment of the American families who lived in Torres de San Lamberto would be pleased that their creation is still a wholesome family affair.

1980s home in River Oaks gets a full makeover

Aging well at home could depend on home design