The trend of longstanding intown buildings relocating their front doors, so to speak, to capitalize on BeltLine frontage is nothing new. An Atlanta cultural institution doing so is a different story.

But that’s the tactic at play for Atlanta Botanical Garden, where officials say a recent donation will allow the Midtown attraction to expand its footprint for the first time since the Garden’s founding in the 1970s and tap directly into the BeltLine.

The James M. Cox Foundation, a longtime supporter of both the Garden and BeltLine, has donated $25 million toward the 7-acre expansion efforts, which will grow the 30-acre gardens by roughly 25 percent beyond the north section along Piedmont Avenue. It’ll also provide a second entrance to the Garden property.

Next door, the BeltLine is building another section of the Northeast Trail, a paved link between Piedmont Park and southern Buckhead that’s scheduled to open in fall 2023.

How the triangular acreage would be transformed, with one existing building spared along Piedmont Avenue, to allow the Botanical Garden a BeltLine front door. Courtesy of Atlanta Botanical Garden

Garden officials noted in an announcement the expansion will make the botanical utopia Atlanta’s first cultural institution with direct access to the BeltLine’s 22-mile, circular corridor. Mary Pat Matheson, the Garden’s president and CEO, envisions the Garden growing into a destination tantamount to The Whitney Museum in New York City, which found new life once it relocated to the High Line, another former rail corridor popular with visitors.

The donation “is truly transformational, as it enables the Garden to acquire and develop an entrance on the BeltLine that is focused on the most sustainable form of transportation—walking and biking,” said Matheson in a prepared statement.

But the Garden’s work to acquire commercial properties necessary for the expansion isn’t finished.

The $25 million will be combined with $10 million in other donations—half of that a $5-million gift from Carol Tome, UPS’ CEO and a Garden Trustee. The Garden is seeking to raise another $17 million officials say is required to complete land acquisitions. (As the AJC reports, one recognizable, triangular-shaped building along Piedmont Avenue—the longtime home of clothing store Boy Next Door—will be spared and retained in the Garden, while the rest will be cleared, according to the Garden’s plans.)

Once the Garden closes on land purchases within the expansion’s footprint, officials will launch a capital campaign to fund the expansion’s construction. Matheson’s goal is to finish in time for Atlanta’s World Cup matches in 2026.

Around the planned BeltLine entrance, Garden guests will find a new visitors center, water features, display gardens, and exhibition areas. The vision also calls for some of the Garden’s famed mosaiculture sculptures—think: Earth Goddess, “Alice and Wonderland” characters, and cobras—being visible to BeltLine passersby. One such sculpture would be a 20-foot-tall phoenix, symbolizing the city’s endurance. 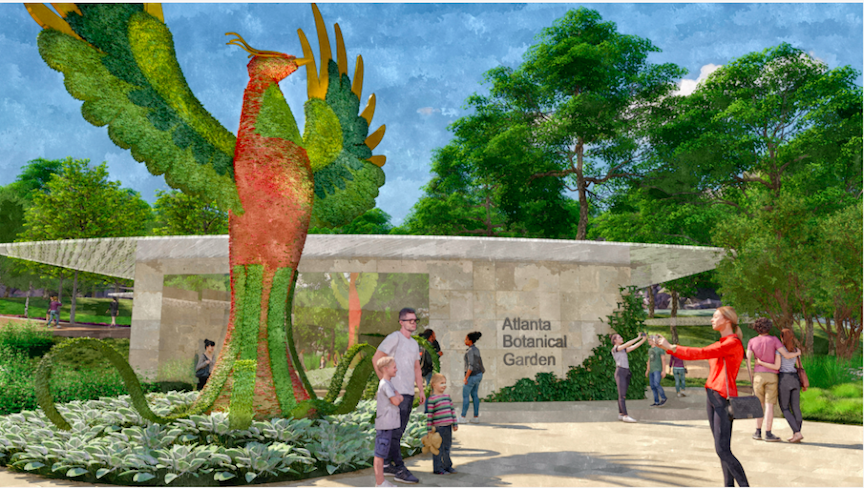 The Garden has been purchasing commercial parcels with private funds for the future expansion for the past several years; nearby, the City of Atlanta spent $20.4 million in 2018 to buy retail and mixed-use property to eventually grow Piedmont Park along Monroe Drive, too.

Just north of the Garden, Ansley Mall’s owners recently announced plans for a bridge behind the shopping center to tap into the same BeltLine trail extension.

Head up to the gallery for a bounty of conceptual images of the Garden’s expansion provided today to Urbanize Atlanta. According to Garden reps, all plans are currently being considered.