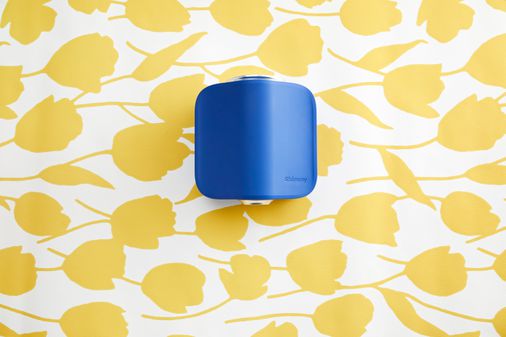 “There were a few competitors that were innovating on fragrance or making bottles more colorful,” Wayman said. “But the longer I sat around, the more I realized that the real points of innovation weren’t being addressed and the real pain points for customers were also not being addressed.”

People still had to touch a pump or squeeze plastic bottle to get that dollop of sanitizer, and many homes accumulated “an entourage of ugly plastic bottles” over time, she said. That got Wayman thinking about how to upgrade the convenience, sustainability, and design of such dispensers.

Shimmy’s touchless model can be mounted to walls, and come with recyclable aluminum cartridges filled with more than 500 doses of plant- and alcohol-based sanitizer. As a carbon- and plastic-neutral company, Wayman said Shimmy tries to avoid producing single-use plastic at every point in the supply chain.

It is launching with three core colors: white, gray, and navy. Customers who wish to further customize their dispensers can do so by using peel-and-stick design paper.

The company also will regularly release limited-edition colors, Wayman said. For the holiday season, Shimmy is scheduled to roll out a hot pink, along with three pastel hues. Each dispenser’s faceplate is also detachable, so users can switch out colors as they please.

Shimmy plans to roll out a variety of light scents for customers to choose from, in addition to a fragrance-free formulation.

The company also is working with a dermatologist to create a formulation for eczema-prone skin.

“We feel like this area is actually a very underserved part of the market,” Wayman said. “My son actually has eczema and my daughter did when she was younger.”

Shimmy will retail at $74 for the dispenser, including batteries and a full cartridge. Wayman said she envisions her product becoming a staple in bathrooms used by children.

“I have three kids right now all under the age of five and they struggle with hand washing. When they walk in, I’m fighting to get them down the hall to the bathroom,” she said. “But they absolutely love using Shimmy. They walk in and they almost fight to use it first because they feel autonomous.”

Thanks to $3 million in seed funding, Wayman said, Shimmy has been able to develop and stock its dispensers, as well as invest in product marketing.

One of its largest investors ― at about $300,000 ― was the Wayfund ― a network of former and current Wayfair employees created to support Wayfair alumni and their startups. Founding member Ryan Durkin said Wayfund trusted that Wayman, a former Wayfair employee, has found a market that won’t disappear after the pandemic.

“Human behavior is fundamentally changing here across a number of dimensions and one of them is just people trying to take their health more seriously,” Durkin said. “People are going to continue cleaning their hands and overall taking more care of themselves.”

Angela Yang can be reached at [email protected]

A Tiny London Bathroom Gets a Forest-Like Makeover