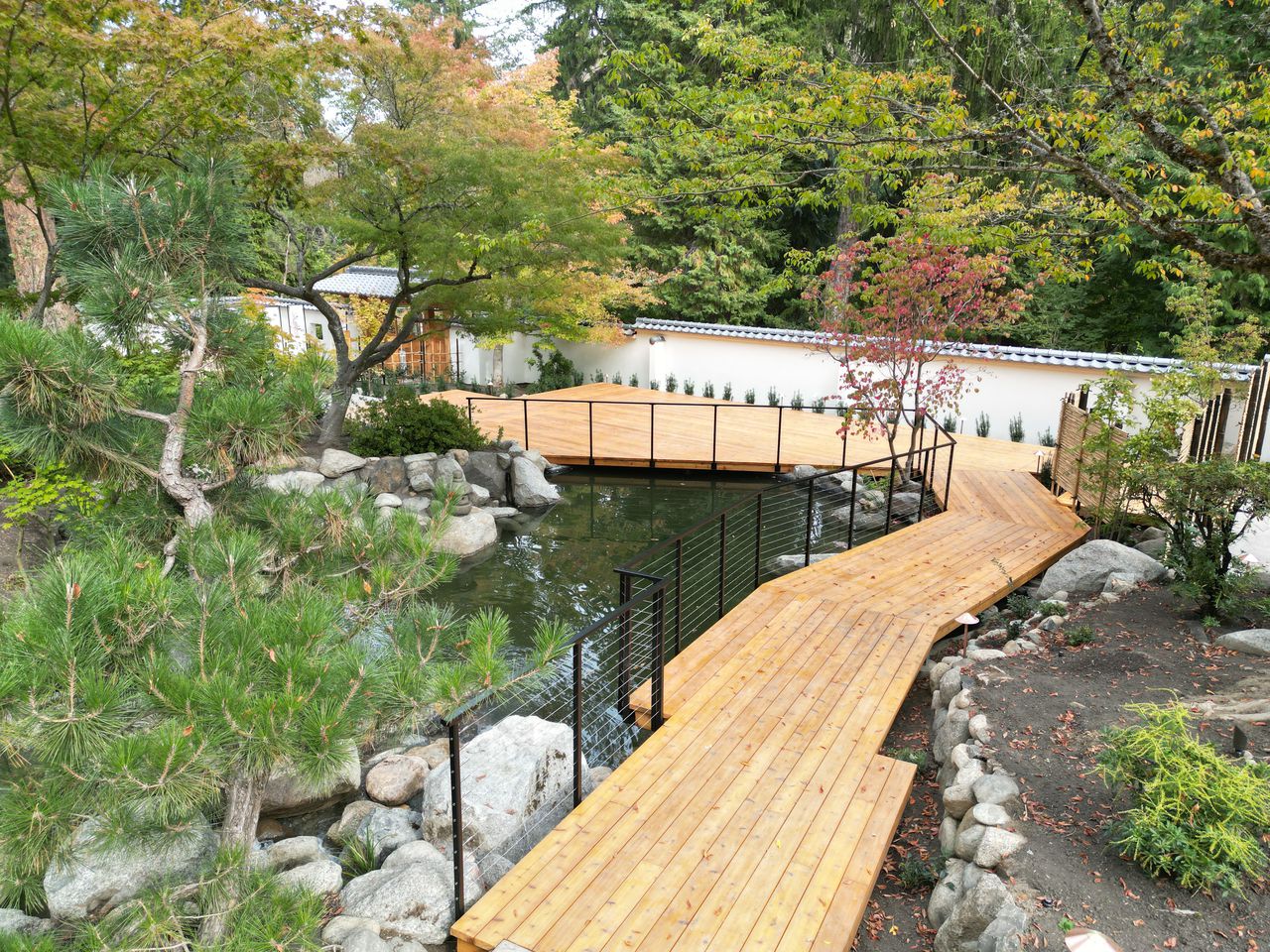 Landscape designer Toru Tanaka, a former garden director of the Portland Japanese Garden, transformed less than an acre of the 100-acre Litha Park into an immersive horticultural experience orchestrated to erase outside concerns and plant people in the present.

Tanaka took full advantage of historic trees that had grown in the footprint reserved in 1915 for a Japanese garden. He maximized forested and mountain views beyond the garden’s fence, and created tranquil, contained areas that borrow from adjacent scenery.

Amid new plantings, accessible pathways and landscape lighting are towering pine trees and shimmering maples that have anchored the space for generations.

Although Ashland’s Japanese garden is small, it is a distinct, enclosed universe that evokes strong responses. It’s impossible to see the boulder islands, carefully positioned in a sea of sand, and not feel as if they represent the unattainable.

Galen Workman, visiting from San Francisco, attended the garden’s re-opening on Saturday, Oct. 22. He brought his camera and joined a long line of people waiting in the rain for a first look.

“The restrained stonework and elegant waterways in the garden are a spectacular complement to the vibrant fall colors all around Lithia Park,” said Workman. “There was a feeling of tranquility there despite the opening-day crowd that included boisterous children.”

The entrance stone path beyond the wood gate showcases two Douglas fir trees planted by the Ashland Boy Scout troop in the 1920s. The flagstones continue to a gravel footpath contoured to face a dramatic waterfall and follow the flowing creek.

After the moss garden, the looping path reaches the zigzag bridge over a pond and then the elevated wood deck near the front gate.

Sets of stepping stones, each precisely placed but appearing meandering, lead to intimate, contemplative seating spaces. And a series of angled bamboo fences obscure, then reveal, the striking sand and stone garden.

A volunteer docent told Workman that the garden’s stone lanterns were made in Japan at least a century ago. One is 200 years old.

“Their beauty and their feeling of purposeful presence make me want to know more about them,” said Workman, an internet marketer and website designer who plans to return to Ashland to see how the newly planted camellias and other shrubs interlace with the paths, waterways and stonework.

“The whole atmosphere of the Japanese garden is that of an authentic taste of a culture very different from that of mainstream southern Oregon,” he said. “The garden is a vision of restraint, solidness, quality and calmness.”

The improvements to the land dedicated to a Japanese-style garden did not happen without considerable time, cost and controversy.

Despite good intentions over more than a century, Lithia Park’s garden was Japanese in mostly name only.

The long-ignored garden, dwarfed by other landscapes, playgrounds and hiking trails in Lithia Park, is near the site of one of the city’s first, dusty industries: A sawmill along Ashland Creek.

The main entrance would enhance the downtown Plaza area, and the park would border the grounds of the Chautauqua arts and culture programs, which in 1935 became the Oregon Shakespeare Festival campus.

In 1914, John McLaren, superintendent of Golden Gate Park, was hired to design a park with forested and landscaped areas.

From the start, McLaren included an area for a Japanese-style garden, laying out a watercourse and paths. Vegetation took root over time, including a dozen Douglas fir trees planted outside the garden’s unmarked boundary by Boy Scouts.

Other easy-to-grow, signature plants of the Pacific Northwest also found their way into the garden and some happened to be Japanese maple trees and flowering azaleas and rhododendrons that originated in Japan. Also in the horticultural mix were vines and shrubs not common in Asia.

The last major investment in the garden was 40 years ago, when city parks horticulturalist Donn Todt and volunteers raised funds to shore up the watercourse with concrete and bring more greenery to the sloping rectangle that spans from the park’s Winburn Way to residential Granite Street.

Before the latest redesign project began two years ago, visitors navigated undulating, uneven and slippery walkways and unintentionally tramped the exposed roots of an Ivy Leaf maple. Purists also noted that a Torii-style gate, added in 2015 at the top of the steps to the garden, wasn’t appropriate since it was not an entrance to a Shinto shrine.

True Japanese gardens are influenced by Shinto, Buddhist and Taoist philosophies and are precisely designed to help visitors be “in the moment,” say experts. Essential elements are different sizes of guiding stones, the life-giving force of water, and plants that deliver a tapestry of colors over the seasons.

Well-designed gardens make the most of their setting and rely on borrowed scenery — mountains, sky and other natural elements — to extend the experience. One of the most treasured offerings at the Portland Japanese Garden, considered the most authentic outside of Japan, is a bluff-top view of Mount Hood.

The best Japanese-style gardens are a sanctuary of idealized beauty, a refuge from hectic, urban life.

And Jeff Mangin wanted this for Ashland.

In 2018, the Ashland resident, who serves on the board of the Ashland Parks Foundation, and his late wife’s family donated more than $1.3 million to enhance the garden, curate existing elements and install meaningful Japanese features.

He hoped an authentic Japanese garden would encourage more personal and social involvement among residents and visitors.

The project was temporarily halted when residents objected to the plan to cut down two of the 12 historic Douglas fir trees.

Designer Tanaka of Portland Landscape Design and Japanese Garden Specialty reworked his plan and the city agreed to expand the original half-acre garden to three-quarters of an acre.

A walkway now circles the once-vulnerable Ivy Leaf maple. Other improvements paid for by private donations include lighted pathways accessible to people who use wheelchairs and baby strollers, and a storm-management system.

Mangin will also donate $60,000 a year for 10 years to maintain the Japanese garden.

Despite heated objections, concerns about changing the garden and two years of construction, Ashland parks and recreation director Michael Black, who oversaw the project, said he feels a peacefulness when he’s strolling the paths.

“There’s solemnity,” he said. “The project was built upon the framework designed more than a century ago.”

Lithia Park on Winburn Way in Ashland is free and open to the public daily from dawn until 11 p.m. Gates to the Ashland Japanese Garden, which is also free to enter, will be open 7 a.m. until dusk. Security cameras monitor the grounds. For more information, ashlandjapanesegarden.org.

Our journalism needs your support. Please become a subscriber today at OregonLive.com/subscribe.