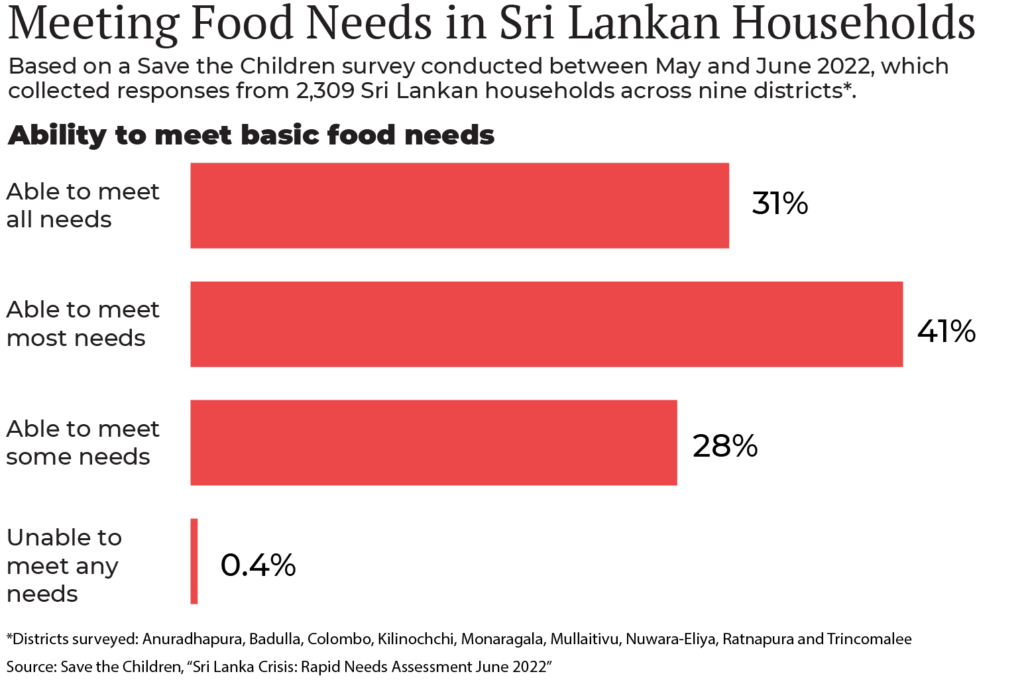 MANNAR, SRI LANKA — As this island nation reels from an ongoing economic crisis, as inflation surges and food prices spiral out of reach, as families cut back on meals and children ache from hunger, policymaker attention has increasingly turned to a homegrown stopgap: gardens. In recent months, government officials and advocacy groups have offered seeds, saplings, garden-startup funding and horticulture lessons in hopes of forestalling widespread hunger. For a time, the government even gave public-sector workers Fridays off to tend to their crops and stave off food shortages.

In such dire times, gardening to prevent famine can feel as insufficient as bandaging a gunshot wound, particularly when, in a recent survey of Sri Lankan households, only half of respondents said they had access to cultivable land. But advocates say doing nothing is worse. “Food security is not something that can be handled by someone else,” says Mariampillai Selvin Ireneuss, an activist who works on food production and hunger prevention. “The community must produce its own food. We have to produce ourselves, store ourselves, process ourselves, distribute ourselves, determine prices ourselves and ensure our existence.”

Sri Lanka is buckling under the worst economic crisis since it gained independence in the 1940s, the result of a crushing debt load, the collapse of the tourism industry and a drop in remittances, the money Sri Lankans living abroad send home. After mass protests, the president resigned in July, but the change in leadership hasn’t stopped food prices from soaring and incomes from plummeting — a recipe for malnourishment. The World Food Programme, a United Nations agency, has started providing cash assistance, with plans to help more than 3 million people this year, but nearly twice that many are already grappling with food insecurity.

In a survey by Save the Children, a London-based aid group, 2 in 3 Sri Lankan families said they could not meet their household food needs. One in 3 said they had cut the amount of food their children ate. Some had even resorted to last-gasp measures: borrowing money, taking their children out of school, selling their homes, or turning to begging, stealing or sex work.

Gardens are a well-worn response to precarity: The United States, for instance, championed so-called victory gardens during last century’s world wars. After Sri Lanka’s civil war ended in 2009, officials helped establish hundreds of gardens in the country’s north, where many families lost land or income during the decades-long conflict. While a garden alone can rarely meet an entire household’s nutritional needs, it’s a proven “safety net in dire food situations,” according to a study in the academic journal IOP Conference Series: Earth and Environmental Science.

“Home gardens are also part of the fight against hunger,” says Selvanayaham Uthayachandran, agricultural director of the province that includes Mannar, a fishing and farming region in the country’s north. “We are increasing the production of green gram, cowpeas and groundnuts. This byproduct is not only hunger-relieving but also nutritious food.” 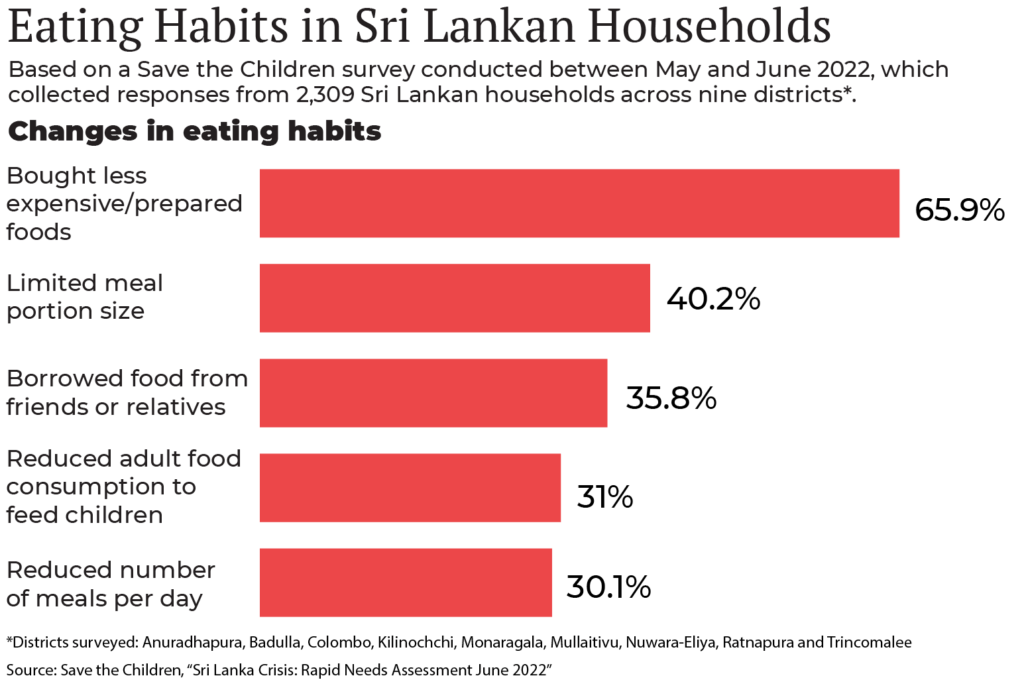 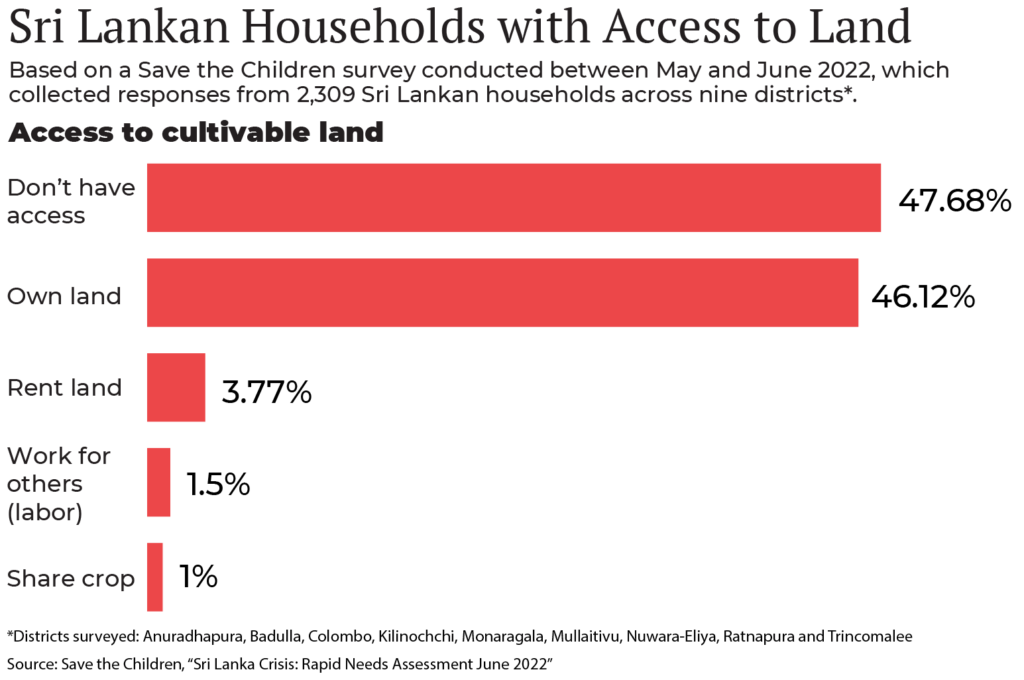 Earlier this year, the Department of Samurdhi Development, a government agency that helps Sri Lankans in need, started distributing eggplant, tomato and other seeds, as well as small stipends, to more than 1.2 million families. The program is a response to anticipated food shortfalls, says Anton Selvakumar Aron Thuram, who oversees the effort in Mannar. “Food production is the first requirement of the country today. That’s why we encourage it.”

One beneficiary is Kartheepan Isthika. The 27-year-old once worked as a maid in Malaysia but came back because the money wasn’t worth the strain of living abroad. Her husband works at a local market, but as prices soar, their ability to buy food withers. “It is difficult to live in this country if we rely on his salary alone,” she says.

To feed her household of five — including her children, ages 3 and 1, and her husband’s father — Isthika relies on her garden of flowers and edible plants. From the government program, she got two sets of seeds and 1,500 Sri Lankan rupees (about $4) — not enough to start a garden from scratch, but a help. She grows pumpkins, okra, eggplant, bitter melons and bananas. “We take what we need and give the extra to our parents. We will sell the rest at a lower price,” she says. The family also fishes for carp, shrimp and sandfish. These days, their only regular food purchase is rice. 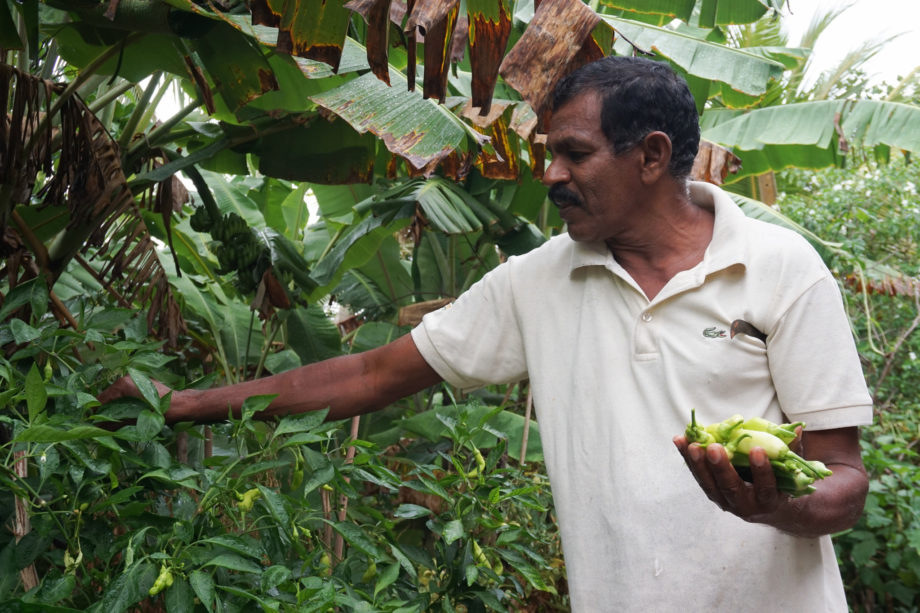 Seemampillai Sahayaraja harvests vegetables in his home garden in Mannar, Sri Lanka. The garden provides most of his four-person household’s meals.

With the country in disarray, it’s unclear how long the government program will last. “There is no domestic economic activity. There is no support from the political side to address food insecurity,” says Sivasaravanabavan Sunthareswaran, an activist who promotes organic gardening. So civil society groups have joined the gardening push.

A group named UYIPPOO has donated thousands of cassava cuttings to schools around the country; the starchy root vegetable is both filling and easy to grow. Another group, the Vanni Tamil People Union, is distributing cassava and bananas. Recently, it gave away 5,000 cassava cuttings in Kilinochchi district, northeast of Mannar. They were gone in an hour. “People are really afraid of the coming of famine,” says Yesudas Lakshitaran, the group’s district coordinator.

Homegrown crops may offer nourishment that families can no longer afford to purchase. In the early 2010s, a doctoral student at Michigan State University in the U.S. surveyed more than 100 gardeners in Jaffna district, on the island’s northern tip. On average, each gardener cultivated nine plants on less than an acre of land, providing a steady supply of “fresh and nutritionally rich” produce, such as eggplant, okra, green chile and long beans, and sometimes additional income.

Seemampillai Sahayaraja, 60, retired last year from his job as a village officer in Mannar. Lately, he devotes much of his time and pension to his garden, where tomatoes ripen, roses perfume the air, and the soil squishes from recent rain. The garden provides most of his four-person household’s meals, save an occasional purchase of carrots or yams. “Our family can live without hunger because of the rice we sow,” he says — at least for now.